Is healthcare system optimized for health or for money? Patient’s perspective.

That healthcare is expensive is widely known. So, citizens should accept health services with gratitude and respect.

But looking at healthcare delivery model as a citizen and a patient (not as a professional healthcare administrator), one can spot at least three areas where money could be saved for the benefit of patients.

General practitioners (GPs) are overloaded almost everywhere. As a result, patients are often too easily pushed to hospitals instead of being treated in the comfort of their homes.

A typical story: a man in Germany was experiencing a severe cough, dizziness, fever and breathlessness. Such symptoms can indicate a flue, bronchitis, but also sometimes heart failure up to the upcoming infarction. A local GP who appeared only the next day suggested an immediate hospitalization. Already surviving the night, a patient was apparently not keen on the perspective. ”Why to go to the hospital right now?” “Because – replied a doctor with authority – you have already had a history of heart problems. Besides I don’t understand why you don’t want to go to the hospital”. A surprise was so genuine as if she was proposing to drop into a nearby pub.

True, the sick person went through heart operation with several bypasses about 10 years ago. But is that a sufficient reason to drag him to the hospital exactly at the moment? Fortunately, this man urgently demanded the troponin blood analysis (protein found in heart muscle that are released into the blood in case of the heart damage) to rule out myocardial infarction. On top, he requested the ECG. Both analyses can be performed at home. The result on the troponin was negative. There was no urgent need for a hospitalization.

This case is not unique: according to the World Health Organization (WHO), 20% of hospitalizations in Germany in 2012 were preventable or totally unnecessary: in other words, the hospitalization of every fifth patient could have been avoided through timely and effective provision of ambulatory care.

The outcome of the story this time was positive. Another GP came diagnosing bronchitis and allowing the man to stay at home. It took about 20 euros to pay for the medications vs. thousands that could have been spent to cover a few days in a hospital. It was also a human factor that made the difference: the physician with the ambition to help his patient. The system was obviously prioritizing hospitalization over the ambulance care.

No doubt healthcare is a very complex business. It is proved by numerous medical protocols guiding medical procedures. “Primum non nocere” or “first, do no harm” is a fundamental bioethical principle every medical student is taught at school. It is better to do nothing, than to risk causing more harm than good to your patients.

However, blunt adherence to prescribed rules can cover professional incompetence and indifference.

Another typical story: a man in his early sixties, strong and sporty, suddenly felt dizzy. He diagnosed himself with the approaching stroke. Knowing that there is a window of three hours within which help should be delivered, he called the ambulance. Within those 3 hours a neurologist should perform a brain computer tomography (CT) to determine the nature of stroke. In case of ischemic (which is over 80% of all strokes), some of the blood vessels are blocked by a thrombus (fat or blood clot) that disrupts the blood flow from reaching certain areas of the brain to supply it with oxygen. The thrombolytic drugs can dissolve the clots, reestablishing the oxygen supply. The same treatment, however, can kill when a weakened blood vessel ruptures spilling out the blood into the brain. The so-called hemorrhagic stroke.

The arriving emergency took a man to the nearby hospital in the city of Freising (in Bavaria, Germany). Unfortunately, it was Sunday night. Worst time getting to the hospital as all specialists are fast asleep expected to be back the next morning. The assistant doctor on call this night was not an expert in reading CT brain images, nor was she allowed to. Only a trained neurologist can read the CT image to detect lesions in patients. So, the decision was simple: wait for the next shift of neurologists to come leaving this patient for 6 hours without any help in the emergency department.

Unfortunately, the stroke was not aware of such human constraints. It let itself develop. The patient in question was sitting meaninglessly before the assistant doctor on duty who diligently filled the lengthy protocol. “Better to do nothing” condemned this patient, who came to the hospital only with minor impediments, to years of paresis.

Should this doctor dare to wake up a neurologist, a man would have received a proper treatment, e.g., with thrombolytic medications, anticoagulants, antiplatelet agents, for instance, a simple heparin injection, as well as antihypertensives and peacefully returned home after spending a couple of days in a clinic. In extreme case, an endovascular device could be applied. The whole procedure would have probably cost several hundred euros. But alerting a colleague in the middle of the night was not mentioned in medical guidance. The logic of the caregiver that night was unassailable: nothing personal, I am doing my job according to instructions.

Recently I have learned that the Freising hospital had made an agreement with the large University clinic in Munich. Professional neurologists can now provide 24×7 remote video consultancy and in extreme cases personally come to Freising. I assume that the above described case was not unique, and the accumulation of similar cases eventually outraged both patients and authorities. But how many lives should be disturbed before the decision was taken? 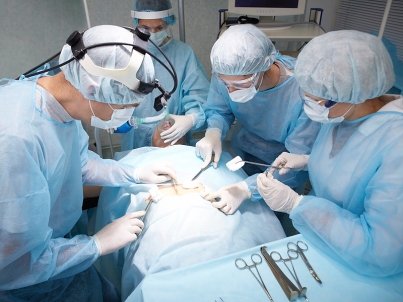 Too often medical professionals resort to radical interventions without sufficient reasons. Money is lavishly spent on medical procedures, which are not only needless, but may be harmful.
Thus, according to AOK 2014 report (AOK is one of the largest German health Insurance houses): 19,000 deaths could be prevented, should unnecessary surgeries be avoided.

For a comparison: car accidents in Germany took away the same year 3.290 lives. The situation in the US seems to be no better. Avoidable surgeries might account for 10% to 20% of all operations in some specialties, including a wide range of cardiac procedures. According to the Medical Experts Online, the US company that provides patients a platform for a second medical opinion, in 66% of cases the first recommendation in favor of surgical intervention was found inappropriate.

Studies revealed that physicians were often “incentivized to perform surgical procedures, either for financial gain, renown, or both”. Many of them complained “surgery quota” was imposed on them by health administrators, due to the provisions hospital were getting from insurances for each operation. Considering that a surgery costs on average about 40K – 50K euro, the business seems lucrative.

It is not accidentally that the modern healthcare system was traditionally focused on treating the disease vs. preventing it and supporting health. As one cardiologist with 19 years of experience formulated: “The key is that the early prevention won’t make profit. In treatment, operations like placing stent will be profitable, while oral education on prevention won’t make great financial benefit. Patients spend a lot when they get diseases”.

Perhaps such economics is good for insurances and some hospitals, but effectively it is just a money wasting: it is a patient who ultimately pays with both his money and health.

Professional health managers and scholars can provide deeper analysis on healthcare economy, but from a patient perspective the healthcare system we currently have is rather optimized for generating revenue than for the effective care. Paradoxically, in this way the system is losing both: money and efficiency.

← Slow pace of healthcare innovations. Why?
Can technology augment our senses for better diagnostics? →