Have you ever doubt your doctor’s decision? If so, you are not the only one. Even doctors nowadays doubt the efficiency of healthcare system advising patients not to trust physicians “any more than you trust your stockbroker (if you are foolish enough to have one) [1].
This is a warning sign. If there is no trust between patients and physicians the positive outcomes of care are highly questionable.
The majority of patients do want to trust their physicians – actually doctors are their last resort for relief and comfort. I have also little doubt that physicians predominantly want to do their work well. That is to cure people and make a difference in their lives. That is what physicians were taught to do during many years of training. Unfortunately, care and cure are not the only things doctors have to consider under the requirements of the modern healthcare system. There are hundreds of KPIs they have to report on: the patient’s waiting list, time spent on each patient, average days of hospitalization, readmission, complications and – not the last one – costs.

Patients have only one KPI to care: that is to feel better. But this KPI encompasses all that physicians ultimately want to achieve. If this is the case, patients are the best allies to physicians to improve the efficiency of healthcare as a system. That is why patients’ complaints have to be heard and taken seriously.

What concerns us patients?
1.Indifference. 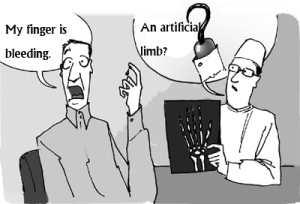 When patients are coming to see their physician they crave empathy. They expect doctors to listen to them, no matter how confusing their story might be. Instead quite often patients are treated like impersonal objects who are disturbing doctors with their dilettantish questions. Maybe this is the reason why many doctors are complaining on their patient’s behavior accusing them of being “difficult, nasty, obnoxious or disruptive”, placing “unrealistic responsibility on their doctors”. [2].

I vividly remember a patient who has visited a doctor with an eczema on his hand. He tried to show the burning spot and explain when exactly it has appeared. The doctor, possibly fighting with her computer, was barely looking at the damaged skin absorbed with the new software that was guiding her through various dermatological symptoms. After the long series of clicks the dermatologist received a suggested medication which was immediately prescribed. A man walked out with a sigh. Later, I have learned that the prescribed medication did not help. On the contrary: the eczema was spreading. A patient simply had to try at random several balms from the nearest drug store. He still did not know what the reason of his eczema was, but apparently one of the ointments he had chosen successfully worked.

No doubt health requires regulations and approved medical practices. Unfortunately those practices do not work for everybody. Modern healthcare is not ready for exceptions. The vivid example is our approach to medications. For centuries the traditional healthcare system was addressing a “typical” patient with “typical” symptoms and a “typical” reaction to medications. This approach appears to be methodologically wrong since it is based on an implicit assumption of the Gauss distribution underlying medical statistics.

The statistical results, e.g. produced in clinical trials, in fact do not answer the crucial question: what is the best strategy for a given patient. The patients’ reaction is simple: 50% of the patients are not adhering to prescribed medications [3]. A typical example: after taking Ramipril, a popular ACE inhibitor, for two weeks a patient complained on unpleasant heart pains and sleeping disorders. The physician’s response was classical: “It is not possible. These side effects are not common for Ramipril.” Only due to the patient’s persistency, Ramipril was substituted by Valsartan, an angiotensin II receptor blocker (ARB). Pains were gone. This was possibly an atypical case, and the doctors tend to disregard such cases offhand.

Misdiagnosis is one of the major threatening issues in Healthcare. According to Kaiser Health News at least 10 to 20 percent of cases are misdiagnosed. One report found that 28 percent of 583 diagnostic mistakes were life threatening or had resulted in death or permanent disability. Another study estimated that fatal diagnostic errors in the U.S. intensive care units equal the number of breast cancer deaths each year i.e. about 40,500 [4]. Quite often misdiagnosis is associated with indifference and formalistic approach to patients.

A mother brought her four-year daughter for a regular checkup. Part of it was the kidney ultrasonic investigation. After 40 minutes of examination, a doctor shook his head showing a worried mother a blurred picture which she could barely decipher. Instead of providing explanations, a doctor insisted on immediate hospitalization. “Surgery will show”, he consoled her. Fortunately a mother took a second opinion at the Pediatric Center. After studying attentively the child’s previous medical history and making his own ultrasound analysis, a young surgeon made his verdict: “You can take your child now”. “To the admission room?”- mumbled the mother who was half-fainted at this moment. “No, just go home”, retorted the doctor. “There is nothing serious”.

One need not only a good equipment, but the ability to understand the picture it provides. The child was perfectly healthy, there was just an inborn peculiar shape of a kidney pelvis – a poorly visible dilation. Just imagine the consequences if a healthy four-year child would have been operated. But the first doctor did not care.

4.Perceiving health as a business

Whenever nowadays we hear discussions about healthcare, it is always about costs. Often we are prescribed medications that are covered by insurances but not necessarily the ones that are needed. We receive inadequate hospital care allegedly because there is not enough money to hire a professional nurse.

Who would expect that a male patient in the intensive care unit (ICU) right after a complex open-heart surgery (five bypasses) in one of the well-known German hospitals (Krankenhaus Bogenhausen in Munich) would receive an oxygen mask with no oxygen? When he tried to push the mask off, 3 nurses on duty that night, jumped on him and forcefully tied him to his bed. It was a sheer luck that a man has survived that night, the first one following the operation. When disturbed relatives demanded explanations the next morning, the Chief Medical Doctor simply responded that the hospital did not have enough money to keep professional nurses in the ICU, so some students were hired. Although the case was outrageous to the point of being utterly criminal, the hospital and its insurer did everything to hush it.

At the same time we see that insurances often generously spend a lot of money on surgery procedures which are not really necessary. Thus, in Germany according to AOK Health Insurance 2014 report, which has provoked indignation among the physicians and hospitals alike, annually there were 19,000 preventable hospital deaths in the country [5]. For a comparison: car accidents took away the same year 3.290 lives.
One of the reasons for such appalling results (in particular, discussed in the German ZDF news program) was the amount of unnecessary surgeries performed in German hospitals that expose patients to the risk of infection, collateral organ damages and finally death. According to the ‘Medical Experts Online’, a company that provides patients a platform for a second medical opinion, in 66% of cases the first recommendation in favor of surgical intervention was found inappropriate [6]. The situation in the US seems to be no better. In fact, unnecessary surgeries might account for 10% to 20% of all operations in some specialties, including a wide range of cardiac procedures [7].

So why insurances are spending money on procedures that are not only unnecessary, but harmful? The more money insurances spent, the more likely they receive additional funds the next year. On the other hand, hospitals are rewarded with a premium from each operation. Considering that each surgery costs on average about 40K euro, this is quite a lucrative business. The only unhappy creature is a patient who ultimately has to pay with decreased health and with his money – an increased insurance premium.

All of the above: indifference, business-like attitude towards health increase the risk for a patient to become a victim of medical errors. Over 23% of the European Union citizens, according the “Evidence on Medical Errors”, shows that 50.0% to 70.2% of such harmful events could be prevented [8].

What patients and physicians can do about it?

•Work tightly directly together skipping bureaucratic mediators. Doctors need to listen to their patients and help them with intelligent questions to relate their story. Modern online collaborative tools such as Microsoft Personal Health Record Health Vault, US clinical decision support system UptoDate and the likes  can help a lot.
•Unfortunately, patients need to look for a second opinion. Ask why surgery is necessary, verify diagnostics with other doctors. Platforms like Medical Experts online or BUPA Medical second opinion service could be helpful.
•Patient have to educate themselves. Although an educated patient can be perceived as a challenge for a doctor, patient is in fact his best partner. There are many professional applications like NHS Choices, US Center of Disease Control and prevention (CDC) now available at Microsoft store that can help people preparing themselves for a meaningful discussion with their physician.
In the next few blogs we will take a closer look at patient/physician relationships technologies.

13 Comments on “Why patients distrust physicians?”